Street Fighter 30th Anniversary Collection is officially out today for Xbox One, PS4, Switch, and Steam!

Hit the jump for more info.

As shown in the trailer, Street Fighter 30th Anniversary Collection features 12 Street Fighter titles from the last 30 years. All of these games have fully functioning offline arcade and versus modes.

The four games shown below, on the other hand, will be the only games that have online matches, both ranked and casual, and training modes.

Here is an interesting note Capcom made about the lobbies.

Up to four players can be in one lobby at a time. When creating one, you can choose which of the four games you’d like to be available to play. If you only want to partake in Street Fighter III: Third Strike games, make sure to uncheck the other three. If more than one game is checked, players will vote for the game they’d like to play the most. When in a lobby, you can also spectate to see all the action as it goes down!

For those interested in the timeline of Street Fighter, Capcom has you covered with the Museum. Here is what Capcom said about the various features of the Museum.

History – Journey through this interactive timeline to learn about key dates and uncover concept art related to each game in the series. 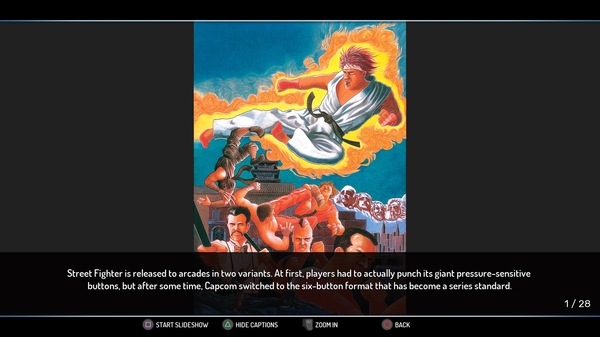 Characters – Learn more about the world-famous characters in the Street Fighter series, including their background, likes, dislikes, and even blood type. You can also look at frame-by-frame character sprites in each of their appearances!

Music – Street Fighter is known for some unforgettable themes that have stood the test of time – some even becoming internet memes. Choose which of the 12 games you’d like to listen to the sound track of, turn up the volume, and relax as the notes of nostalgia flow through your ears.

All in all, this collection seems like a solid way to play and learn the history of the older Street Fighter games.